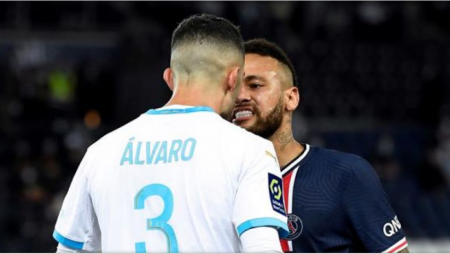 The match between Paris Saint-Germain and Olympique de Marseille ended with five expulsions and complaints of racist insults between players. Neymar faces an exemplary penalty after hitting Spanish player Álvaro González on the head. Marseille won by a goal to zero at PSG.

Verbal and physical confrontations were the protagonists of the match between PSG and Olympique de Marseille. An embarrassing and regrettable encounter difficult for football fans to forget. Ninety minutes in which football was conspicuous by its absence and in which the players of both teams forgot their sportsmanship. From the first minute, the players of both French teams took advantage of any play to turn it into a disagreement.

Paris Saint-Germain lost by a goal to nil in their stadium. The match ended with five expulsions and twelve yellow cards. The biggest brawl took place at the end of the match after an entry by Benedetto to Leandro Paredes. A verbal disagreement that ended in a fight and in which the Brazilian was expelled. Neymar faces an exemplary penalty, between 4 and 7 matches according to the LFP regulations.

The referee, Jerome Brisard, sent off Brazilian Neymar after hitting Álvaro González on the head with his hand. The PSG player denounced the Spaniard for uttering racist insults and told him “no racism, no racism.” After the game the confrontation continued on social networks, where Neymar expressed through his profile: “The only thing I regret is not having hit that asshole in the face.” And he added, “Now I want to see the image of the racist calling me ‘monkey son of a bitch’ … I was expelled, what about him?”.

For his part, the Olympique de Marseille player answered Neymar with a photograph that showed part of his teammates, all of different nationalities and races. The text that accompanies the photograph expresses “there is no place for racism. Clean career and with many colleagues and friends on a daily basis. Sometimes you have to learn to lose and take it on the field. Incredible 3 points today.”